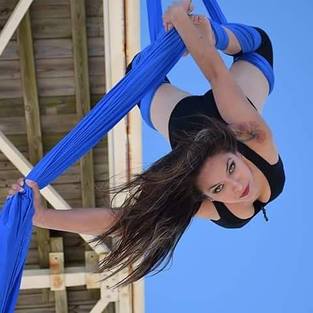 Daniela is the owner, founder, and principal instructor for Springfield Aerial Fitness. Daniela has been in dance performance companies since 2005 as well as Springfield Dance Alliance from 2011-2016. When she discovered aerial arts in 2015, her fascination quickly grew to an obsession. She began traveling around the United States and studying as much as she could in order to bring back quality education that her instructors could be proud of.
She got her teacher certification from Aircat Aerial Arts in Boulder Circus School in August 2016 and has gotten to train with world renowned performers such as Tanya Burka, Rain Anya, Waverly Jones, Sarah Romanowski, Teo Spencer, Elsie Smith, Aaron Koz, Itzel Salvatierra, Jenny Atomic, Fractal Tribe and the team at Frequent Flyers.
As with rock climbing, aerial arts serve as a method to train her body, mind and spirit. Her passion is to find stillness, map fears, crush limiting beliefs and connect to one’s higher self through movement. Her favorite part about sharing her aerials is watching this process happen in others and noticing how it effects change in other aspects of their lives. Marissa is one of our Pole Fitness, Circus Kids and Silks instructors. Marissa has been with Springfield Aerial Fitness since 2016. Her background in movement originated with dance and expanded into fitness. When she found aerial (despite a fear of heights) she quickly discovered you could combine the two. She has a deep admiration for the "Ground-to-Air" style of aerial, particularly with aerial sling.
Continuing education and expanding her aerial lineage are paramount to Marissa. She has trained with various distinguished instructors such as Susan Murphy, Danielle Garrison, Yuki Tsuji, Teo Spencer and the Frequent Flyers team.
Marissa believes aerial is self-care in all forms: physical, mental, emotional, spiritual. She hopes to share these practices, while encouraging others to believe in themselves and their capabilities. Aerial has helped her break through mental barriers, achieve goals, and supported her as she evolves in life and her training. SAF and the aerial community has given her a home. 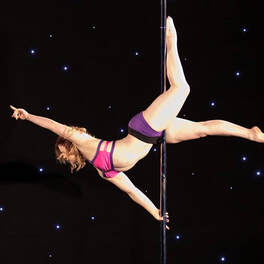 ​Josi's love affair with pole started in 2013 when she took her first pole class in Modesto, California. Over the years she has performed at several open houses for her previous studio, fundraising events, and even competed in the 2016 Pacific Pole Championships. Exotic flow and sensual movement has helped Josi get more comfortable in her own skin and renew lost confidence, and there is nothing she loves more than seeing others benefit and fall in love with pole the way she has. Her expressive, inviting, and sassy personality mixed with floor work and spins makes exotic classes that much more fun and flirty! 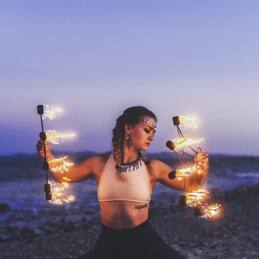 Amanda is our hula-hoop and flow arts movement instructor. Her background in dance and fitness laid a beautiful foundation for when she first found hula-hoops in 2014. This led her to begin performing with hoops and various fire props in 2016. When she discovered Springfield Aerial Fitness in 2018, she began performing with Daniela as well as taking aerial silks classes under her. Aerial, flow arts, and yoga have all allowed a deep level of emotional healing and body awareness to ignite for her. Amanda is incredibly fulfilled by training, teaching, and performing these arts because it brings so many of her passions full circle; creating, being physically active and challenged, expressing emotion with movement, and getting out of the mind and into the body. 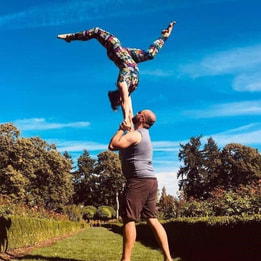 Gizmo has been teaching partner acrobatics for 4 years. She has a background in acrobatic gymnastics,
dance, and pole. She discovered Acroyoga in 2015 and fell in love with the aspects of athleticism,
teamwork, communication, and play that make up the art of partner acrobatics. She has trained with
professionals from across the world, and is instructor certified by AcroLove (formerly Acro Revolution).
She found a passion in Acro and is driven to share that passion through teaching and performing with
the Springfield Aerial Fitness team.